“…he spoke perfect English, which isn’t always the case with Chinese filmmakers and actors we interview.”

Intel has launched its flagship product Core Duo 2 Processors for almost 2 months. But as Microsoft delayed delivery of the Windows Vista, many people don’t see the necessity to replace their old machine.

Therefore those want to try out the Intel’s latest high-flyer have to come up with some creative/extreme ways to destroy their old machine.

Here are some funny clips which teach people how to eliminate the old PC. I have shown them to many friends. The more interesting thing is that different clips appeal to different people with different backgrounds in different ways.

Though the banner behind shows Karate, many of my Chinese friend take this as Taekwondo.

In China, Karate is pronounced Kong Shou Dao（空手道）. Most Japanese Kanji looks the same as traditional Chinese, but pronounced differently. This causes many problems for Chinese when they read Japanese names in English. For example, many of them have no idea who Koizumi is, though they know Xiao Quan（小泉） is the former Prime Minister of Japan.

Also, they consider the Taijitu banner something related to Korean. Probably they have watched too many Korean movies.

This clip is comprehensible to people from the West too. Maybe they have seen such supernatural phenomenon in those anti-gravity KongFu movies, such as Crouching Tiger, Hidden Dragon.

Many Chinese girls find this clip the most interesting. This clip reminds them those Korean movie they have watched.

About 5 years back in China, Japanese TV drama dominated many Chinese regional TV stations, but now, Korean TV drama and movies are the fad. In those movies, just like in this clip, the female characters are fierce, determined and a bit violence sometimes.

This really puzzles me. In my knowledge, Korean are more endocentric than Chinese. A Korean friend told me that, in many Korean companies, if there is no cleaner in the office, female staff will undoubtedly take up such cleaning work. It is the unwritten rule in their offices.

Well, the girl must have had to clean everything up after destroying the machine.

END_OF_DOCUMENT_TOKEN_TO_BE_REPLACED

I went across a newly renovated hawker center and saw this sign yesterday. 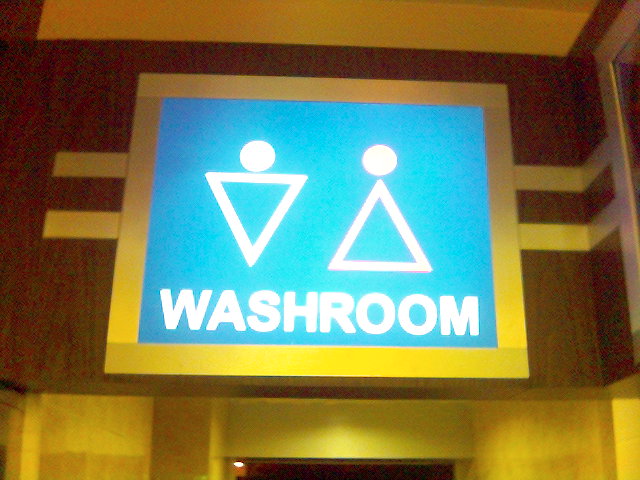 To solve the puzzle, you got to have some basic knowledge of symbolism, or to see the Da Vinci Code movie/book.

The fad of Da Vinci Code has left its mark in front of this toilet.

Singaporean really have a sense of humour here, though it is a bit stressful for those running around to answer the nature call.

I wonder if a person sees a star of david outside a washroom, what should s/he do?

Do your research before do your business!